IN SEARCH OF: The Fort Sumter Flagstaff

IN SEARCH OF: The Fort Sumter Flagstaff

StrangeHistory is seeking the whereabouts of the flagstaff from Fort Sumter, South Carolina, which was removed on April 14, 1861.

Let’s Talk About It!

Here’s what we know:

On April 12, 1861, under orders by the newly formed Confederate States government, General P.G.T. Beauregard commences the thirty-four-hour-long bombardment of Fort Sumter, Charleston, South Carolina. During the fury, the fort's flagstaff (flagpole) is destroyed. Major Robert Anderson, the commander of the besieged Fort Sumter, ordered that a temporary flagstaff be erected in its place by the defenders.

Although absent from the June 2, 1861 ceremony, a month and a half after Fort Sumter, Beauregard curiously gifts the newly formed Orleans Guard with a “part of the captured flagstaff of Fort Sumter” at 713 Dauphine Street in New Orleans. At this point, many questions arise.

This mysterious piece of wood, of which there is no clear description, surfaces in southwestern Tennessee nearly a year later at the Battle of Shiloh. At that time, it appears that the Fort Sumter flagstaff has been turned into a color bearer’s staff. On April 6, 1862, it was carried into battle by the Orleans Guard, commanded by Colonel Preston Ponds.

During the battle, Ponds was ordered to charge Battery D of the 1st Illinois Artillery. While Alabama and Louisiana artillerymen directed their fire toward Battery D, Ponds led his men into the fight. It has been reported by emergingcivilwar.com that the Fort Sumter flagstaff fell four times during the fight before being saved from capture by Captain Alfred Roman of the 18th Louisiana Infantry. 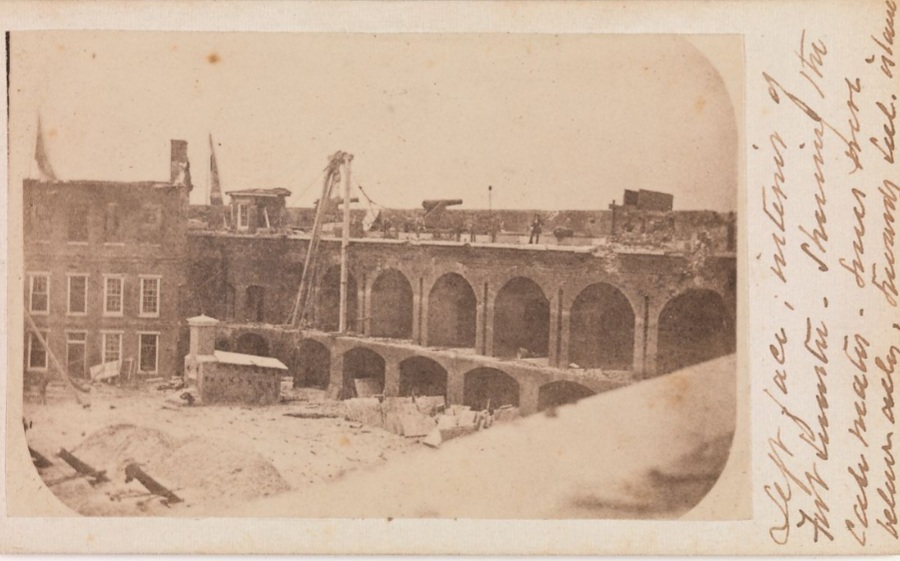 The trail of the elusive flagstaff goes cold with the account of Alfred Roman. He would return to New Orleans after Shiloh to recover from the campaign. Upon his return to service, Roman served out the remainder of the Civil War on Beauregard’s staff.

But what became of this piece of history?

The National Constitution Center, a museum in Philadelphia, has on loan from the Gettysburg Institute a piece of wood with a plaque that reads:

In a post about the flagstaff, the NCC Facebook page states: “This remnant of the Fort Sumter flagstaff fell into the hands of P.G.T. Beauregard, the Confederate General who ordered the attack…”

There is no question that the Woolsey relic is an actual piece of Sumter’s flagstaff that was destroyed by Confederate cannons; however, are these two relics, the Woolsey wood and the Orleans Guard flagstaff, the same? StrangeHistory does not believe they are.

Intense research into the players of this mystery reveals that Charles Woolsey (U.S. Army) was not in proximity to Beauregard, Roman or Ponds (CSA) at any time during the Civil War.

Following Shiloh, the Orleans Guard became a part of the 18th Louisiana Infantry, until it was consolidated into the 10th Louisiana Infantry for use in the Trans-Mississippi Department of the Confederate army (western theater). In the spring of 1864, the 10th was being led by the 7th Louisiana Cavalry in the Red River campaign.

The evidence suggests that some Louisiana Infantry units, including men of the original Orleans Guard, were kept largely in the western theater during the Civil War. If the Fort Sumter flagstaff, and Orleans Guard, stayed in the western theater; and Lieutenant Colonel Charles Woolsey was stationed in the eastern theater, the indication is that the two-foot-long piece of Woolsey wood was retrieved by the Union colonel sometime after the Confederate evacuation of the fort on February 17, 1865. Furthermore, the evidence clearly shows that Beauregard had removed, and presented to the Orleans Guard, Major Robert Anderson’s temporary flagstaff.

So what happened to this elusive piece of wood? StrangeHistory wants to know!

If you know the whereabouts of the Fort Sumter/Orleans Guard flagstaff or possess information that can aid in understanding its mysterious journey, please contact StrangeHistory.org.